First I don't get away very often but when I do, I LOVE to take pictures- as many as I can - so many that this idea may take up a few of my postings.  I haven't posted them before because it seemed like there was always something else going on.  Ok so now, without further interruptions, I bring you ONLY SOME of my vacation photos - 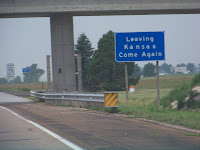 By the way, you will probably want to bigefy
pictures.
Guess what - we were leaving our home
state of Kansas - on our way to Colorado way
back on the July 4th weekend in 2009.  My uncle there had died and we were headed there for the funeral. 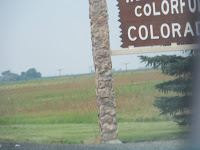 Hey, I said I love taking pics - never did
claim they were good. 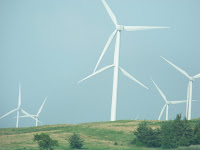 Some of you may not know what these
strange-looking structures are.
...
..
. 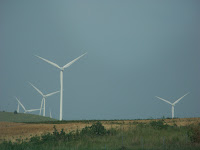 They are called wind turbines and they
are an newer way of generating electricity
using the power of wind - something we have
A LOT of, especially in western Kansas where
these could be seen for miles. 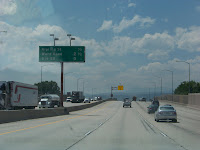 We are on the eastern edge of Denver - you can
see the Rocky Mountains in the background. 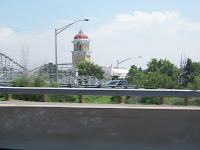 That is the Elitch Amusement Park in
Denver - nope, never have been there and
the only reason I got this pic of it -
you can see it from the highway. 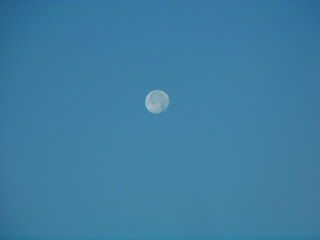 Here is a picture of the moon - I thought it was sort of pretty. 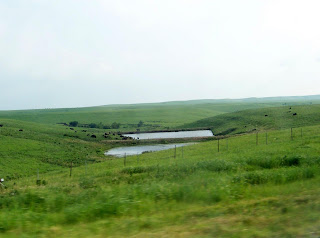 Ok - this is nothing really terrific but there were these two ponds I saw in western Kansas, along with the easy rolling land that to me is pretty and kind of peaceful.


Now I know most of these pics don't show much of our trip - it really was a rushed 3 day trip from Topeka to Denver then homw again. I do have many family pics but I didn't want to bore anyone with those (and I don't know everyones name anyway.  I hope I have some other pics I can show you in one or two of future Mom Day Monday posts.  I will leave you with a picture of the Beaglebratz's Colorado canine cousin, Charlie. 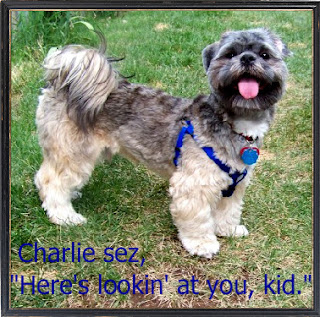 PS - Shiloh'n Shasta have a little exciting news to share - I had thought about posting it today BUT since it involves them, I thought they should be the ones to post it - hopefully tomorrow.

PPS - just wanted to add - at 5:45am,it was already 84 degrees out.  Yes, it will be in the triple digits today and at least 2 or 3 days this week.
The heat index on Tuesday, we could have a heat index of 115. Ok, time to get ready for work.  Ya'll have a great day!
Posted by The Ladies of Beaglebratz Manor at 2:38 AM

It's a great photojournal! Thanks for sharing it.

My Mum used to carry a small digital camera wherever she went with us, even on our daily walks. But, after Mint chewed and destroyed her camera last year, she became very lazy about taking photos.

Your photos in this post reminds me how big America is. Among the photos, I love the shot of the moon most.

Beautiful pictures! Thanks for sharing.

Mom has only been as far as western Kansas a couple of times, but she says there is big hope that those windmill thingies will become popular and help save energy.

We love seeing all your photos, too bad the trip had to be for a funeral, but it is still fun to take photos.

We can't wait to hear the pups' exciting news.

Hot here too, tough when it is still in the 90s when you go to bed and find 80s when you arise.

Taking pictures is not always about perfection, sometimes it is just about capturing the moment. I love the daytime moon, myself, nice shot! It is amazing how many wind farms there are cropping up, all over America. Nice pictures and thanks for sharing, Kim!

Have a great day!

Oh Miss Kim, You did a grrreat job on your SECOND.. Mom Monday post thingy.

Now if you keep up the good work, and with about 87 weeks of pracitce you will be ALMOST as good a blogger as Shasta and Shiloh are. hehehe

Thanks for sharing all of the great pics. I can't wait to hear the big news!