In case you missed our
original post about McKailie,
look HERE

The cancer proved to be too extensive-
it was first found when doing the biopsy yesterday,  August 8th.
It was spread throughout the inside of her mouth on one side and also
along her face on the outside.
It was suspected to be in other areas as well.
She had not shown any discomfort and only missed two meals recently which she went back later to clean up.
Sis thought it would be best not to wake her from the anesthesia but told the vet-
don't do anything til I get there-
Kailie's mom and her son (Kyle picked Kailie out of her litter when he was in the 5th grade) as well as Bailie were all there as McKailie began her journey across the Rainbow Bridge. 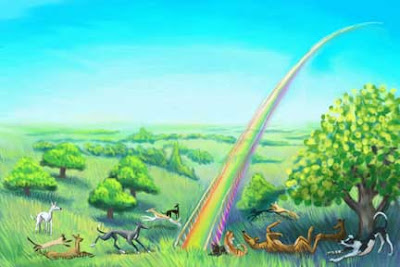 This is one of my favorite pictures of McKailie and her younger sister,  Bailie 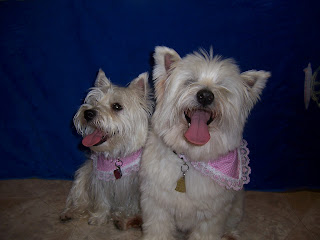 McKailie is the one "laughing".

R.I.P. sweet McKailie - you will remain in all of our hearts and will be missed.

Kim, Shiloh'n Shasta
Posted by The Ladies of Beaglebratz Manor at 4:55 AM

Just so sad. We send you all our love.
Best wishes Molly

Team Beaglebratz....
My most heartfelt condolences go out to McKailie's family. So sad. So heartbreaking. So hard....
~Raelyn and Rose

This is so sad. Our deepest sympathy to McKailie's family and all who loved her.

Oh, I am so terribly sorry. McKailie was certainly beautifuls, and I knows very much loved.
Her family will be in our thoughts.
Rest in peace sweet girl.

deew Shiloh and Shasta
I'm so vewy vewy sowwy that McKailie had to go on hew jouwney to the bwidge, but i am smiling knowing what a gweat life of love and fun she had. Even to the last, she was spawed pain..I know hew family awe heawtbwoken, but she will always stay in the heawts of those who loved hew
wun fwee McKailie
smoochie kisses
ASTA

We're so very sorry to learn that McKailie has crossed the Bridge. We're sure she was greatly loved and will be greatly missed.

That is so sad about McKailie and we sure are sending our thoughts and prayers to her family. It is so darn hard to lose a fur friend.Thanks for visiting our blog.