NOTICE!! NOTICE! We are still around HOWEVER...(and an update) 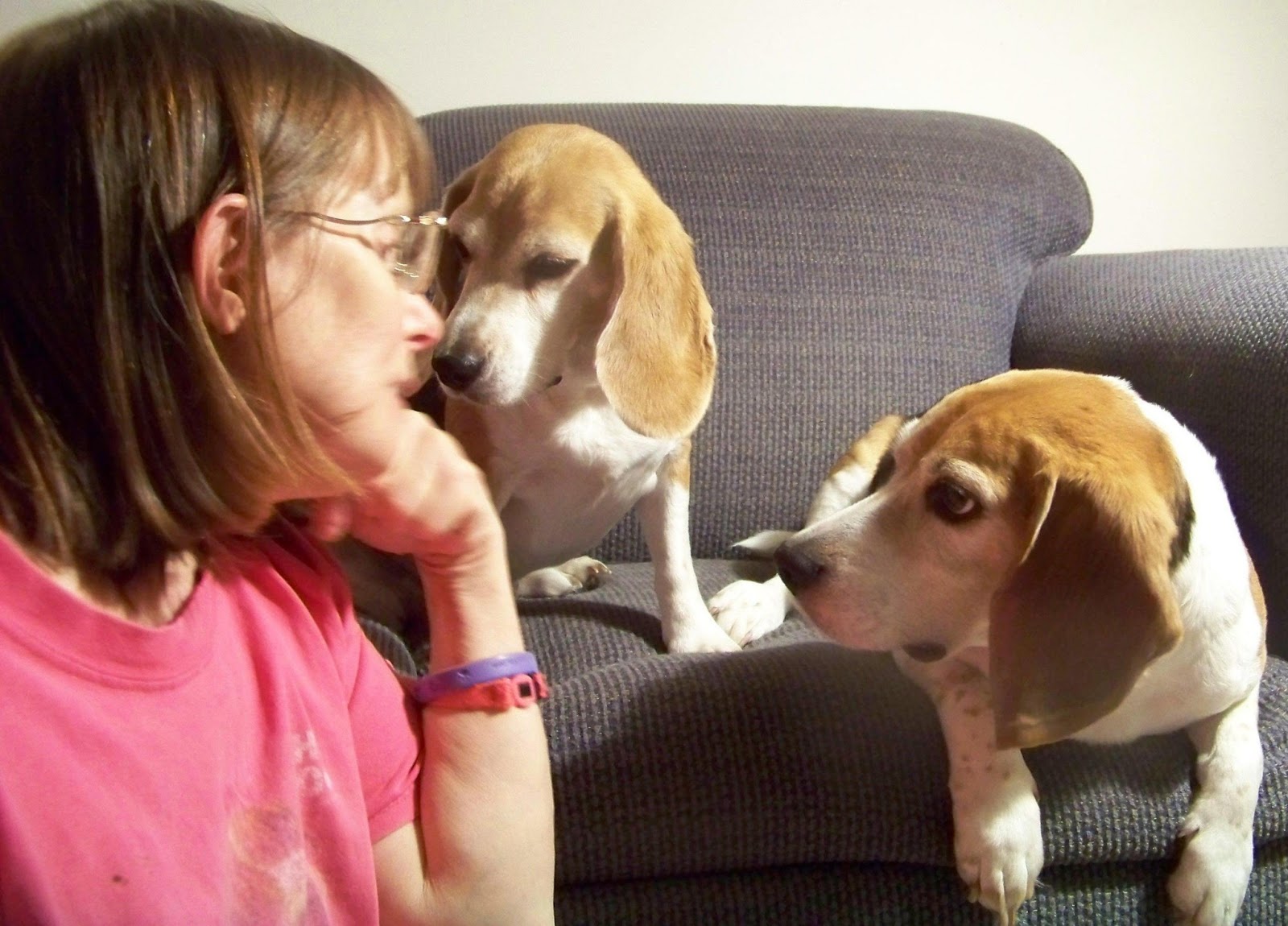 MONDAY(3/31) - Diva's Bailie (Westie cuzin) and Shasta both had their dental work done - Diva Bailie came out better with NO teeth left behind at the vet's while Diva Shasta left one.  Otherwise, Diva Shasta is doing fine and eating as always.
TUESDAY - the workday was nothing different however
sis picked me up after work then went to my place
where in less than a half hour both Shiloh'n Diva Shasta went out then came back in to eat then back out again.  After they came back in, sis and I left for Winchester, KS where my Aunt Elaine and Uncle David lived.  My aunt Elaine had been in failing health for the past few-  months - we had been told that it was now only
a matter of hours before she passed.    When we got
there many of their children were home now as well as 2 of Elaine's sisters.
WEDNESDAY - Usual workday again except for one thing - my sis called me after she got a phone call that even though we knew it was coming, we all still kept hoping and praying for a miracle - it still seems so unbelievable
when our Uncle David called to tell us that our Aunt Elaine had died a short time earlier.
Also in the afternoon on this day, I had an eye doctor appointment - we tend to JUMP and get to the eye
doctor almost as soon as I notice any worsening of my eye condition (for anyone new here, I am blind in my left eye so when something changes in my remaining vision then I get to my eye doctor ASAP)   And yes, things had indeed changed for the worse.  Exactly how worse will be determined when I see my cornea specialist NEXT Tuesday, 4/8.  I do know that my visual acuity this past Frday was basically 20/70 - now I am reading about the level of legal blindness but since that is my DISTANT vision, it doesn't affect my ability to work - at least not much at all.  This problem is by no means new and I have a few blog posts about it - especially since late January of 2010.
Ok - now AFTER my appointment we headed to Rossville, KS where my Aunt Eloise resides in the local nursing facility there.  After my sis and I visited with our Aunt Eloise for a while, reminisced about her husband (our Ucle Harry) we returned home.
THURSDAY - usual workday.  The Beaglebratz loveds that I was home with them all evening - found out that the visitation for my Aunt Elaine will be Friday (4/4)
evening with the funeral Saturday afternoon - in other
words, won't be around much at all until possibly Sunday (4/6). 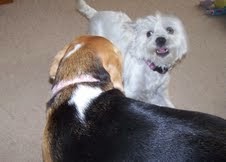 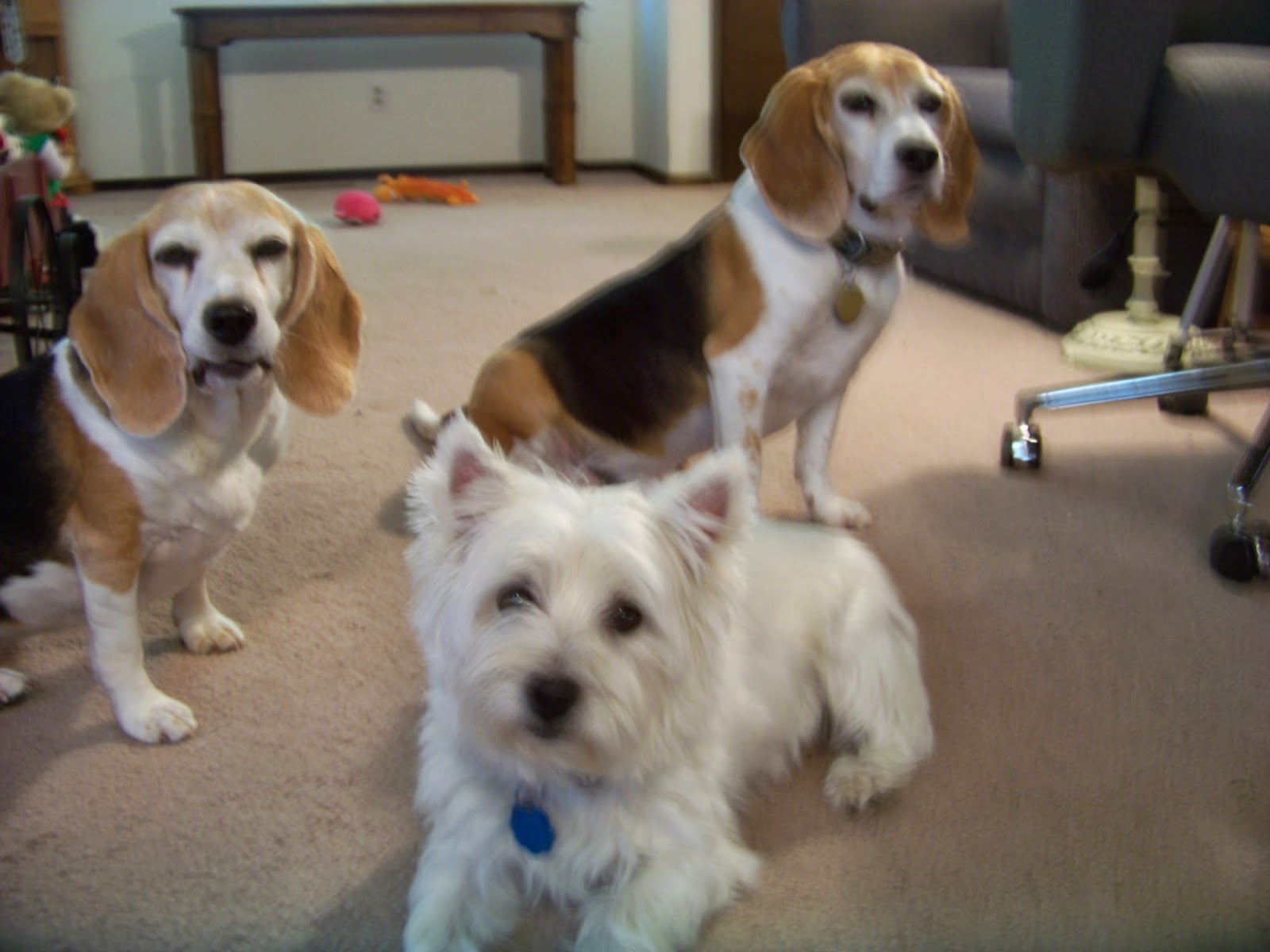 
Diva Shasta & Shiloh with
Diva Bailie, their Westie cuzin
Posted by The Ladies of Beaglebratz Manor at 3:00 AM

Hi Diva Baile. Welcome to blogville as an honary member.

Sorry to hear about all that other human stuff thats been going on.

So sorry about Aunt Elaine. We know you will all miss her. We hope they manage to help you with your eye and that is does not get any worse. Our fingers are crossed for you. Baille and honour member of Blogville sounds good to us. Take care.
Have a fabulous Friday.
Best wishes Molly

Sorry to hear about your Aunt. Keeing you and your family in my prayers

So sorry for you loss...no doubt your Aunt will be missed. Good to hear the dental work went okay and the furbabies came through it okay. Hope the news is not too bad at the eye specialist

I'm sorry for your Aunt Elaine. And my paws are crossed for you and your eye. Diva Bailie is a super cute pup, I'm glad she will be a honorary member of Blogville

WE are so very much sorry to hear about your Aunt.

Welcome Diva Bailie! I'm kind of new around here, too.

You have had a busy week. Of course we welcome Diva Bailie to Blogville with open paws.

So much happening in your world!
I am sorry about your Aunt too,,

And blogville welcomes all!
love
tweedles

Very sorry to hear about your aunt.

And another westie in Blogville? Yay!

Today is April 8th and I hope all is as well as can be with your visit to the cornea specialist. My condolence on loosing your Aunt. My family is all gone now.
Thanks for stopping by my blog
Sweet William The Scot