APOLOGY FROM ME - the mom

FRED of Hound Girl
the reason will become apparent later in this post)
For some reason I was going to have the Beaglebratz talk about this for me but then I thought why should they give up their blogging time and be responsible for something that I did.  They were not the ones in funk mode – that word funk, I’m sure is not even in their vocabulary even if it is dog speak(their vocabulary that is).  Ok – maybe this is a bit over the top but anyway-
Not sure how long this funk has been going on – it may not have ever left me since I know I have dealt with it in the past (and you all are probably thinking Oh no - do we have to see this AGAIN) but then I thought it went totally away – I thought I had dealt with it and conquered it.  I don’t know what it is going to take for me to realize that this funk thing, like the Herpes eye infections I get sometimes (DON’T have one now) anyway, once it attacks your system, it will never totally leave me – in my case anyway.  Rather I guess it will usually go into a sort of dormant state or remission, like the eye infections.  Then one day, when I least expect it, it (the funk) rears it’s ugly self again, just like the eye infection.  Now if you were to see me in the real world somewhere then you might not suspect I am in any kind of a funk – whether it’s active or it’s dormant self – I am good at covering it up to others.  But here in Blogville, I just don’t show up (and of course the Beaglebratz are taking care of me so they are not here either) – at all.  Or if we do make it to Blogville, there MIGHT be a comment or two left but otherwise, NATA, NIL, a big fat 0.  Usually my funk is in conjunction with some kind of increased eye problems or in this case it’s the added financial and job concerns plus thinking about the therapy work that me and the Beaglebratz have, at least temporarily given up (at least that’s what I’m trying to convince myself of) and who knows what else.  But then something whaps me upside the head and it is like a light bulb going on – this funk is causing me to miss something – whether in the real world or here in Blogville and I don't like that
This time it was fellow hound and his mom,

Fred and his mom Kari (Hound Girl)
and Fred crossing the Rainbow Bridge.
Now I do follow this blog and when I have time I try to get it read - I knew Fred had been diagnosed with epilepsy but I hadn't read the blog lately so I didn't know how serious this condition had become.  Then this morning I read this post from Hound Girl - Time Heals All Wounds - maybe it's because I'm a dog parent but that caught my attention and I hoped it didn't mean what I thought it meant - but it did.  After I did some digging and reading on her blog and on her Facebook page, I found out that indeed Fred, the happy go-lucky and terror of whenever and where-ever he wanted, had crossed the Rainbow Bridge a few short days ago. So I hope that if for some reason, that you have not yet stopped by there to leave a note of love and support that Blogville is known for (at least by it's residents) - I know me and the Beaglebratz are going to head over there as soon as this is posted. 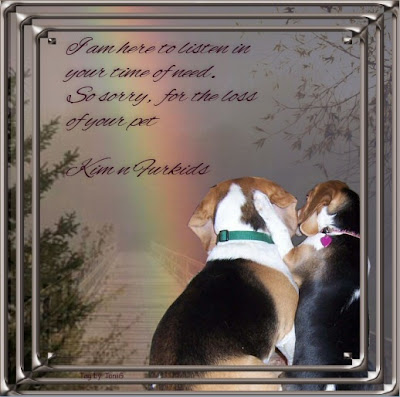 Posted by The Ladies of Beaglebratz Manor at 8:12 PM

Be well; thank you for sharing your funk and reaching beyond it to share Fred's demise. I'm headed there now.

I think this funk thingy hits us in late winter and kind of hangs on until spring has TRULY sprung and the sun has begun to work its magic on our bodies. I hope that yours goes away very much soon.

I had read about our furend Fred. I wish him Free and Fast Runs until we meet again.