I, Diva Shasta, r gonna ALLOW an interruptshun in my puppy pikchurez
TUE-DAY, FRIDAY 10/3,
so I can share with u’all in Blogville an'b-yond a guest post frum
Charlie, frum Charlie Downunder in Oz

Crikey am I crook.  Dad took me for an early morning walk this morning and it rained … BIG TIME.  Now I hate the rain and normally I would find the nearest shelter and hide but not this morning.  Dad took shelter under his mate,  Bruno’s big verandah.  Boy do I wish I had too. Anyway it turns out that Bruno,  a fisherman,  had been out on his boat all day yesterday and last night had a few of his mates over for a barby and one of his mates fancied himself as a bit of a Chef. He had a new recipe he wanted to try. It was an Asian type recipe.  You know …. Full of chilli and garlic and sauce and stuff.   Cooked up a storm,   he did,  in a big Chinese wok and after a big feed and a few beers (well probably a lot really) decided that the cleanup was a bit much so Bruno put the remains of the feast in the wok and left it outside all night.  Yeah … you guessed it … I found it and while Bruno was telling Dad all about his great night I was busy cleaning the wok for him.  Was it ever good!  That wok had never looked so clean.  Anyway it finally stopped raining and Dad and I continued on our merry way.  Dad did see what I had been up to but didn’t really take too much notice.  Well he didn’t yell or anything!!   You think that would be it but no … when we got home Mum was all dressed ready to go out for a big Sunday Brekky so off they both went leaving me at home.  They weren’t going to be gone for all that long so instead of locking me in my crate,  as they usually do,  they thought they would give me a try in the house again.  I have been getting better and not being so distressed when they go out. They were only gone a short while and I started to feel a bit crook.  Talk about tummy pains … oh! My.  I tried to get outside but every door was shut tight.  Did I ever feel bad but what could I do???   First I spewed up on the rug in the family room.  BIG TIME!!!  Then I went to Mum and Dad’s bedroom … not so big!!!!  Then I went to the spare room … pretty big!!  Last of all the study … not much left!!!   Oh!  The relief.   Felt a lot better after all  that spewing.   Didn’t feel so good when Mum and Dad got home though.  Dad mightn’t have yelled at me this morning but boy he sure made up for it when he discovered the mess.  I must say it didn’t smell too good.  All fishy and oily … yuk!!  I got no sympathy.  Just got thrown outside while they tried to clean up. They were most upset cause most of the house is tiled and the only places I threw up were the carpeted areas.  How was I to know that tiles are easier to clean than carpet?   Carpet looks like grass to me so I thought that would be best.  Who knew!!  What do they expect …. Next time I’m crook I’ll just throw up in that toilet thing.  That’ll fix em.  They won’t even know I’m crook. Maybe that’s not such a good idea though cause after Mum finished cleaning everything she did come outside and give me big hugs and kisses and she rubbed my poor sore tummy for such a long time.  I love my Mum!!!!!!   She is just the best.
So remember…  if you ever see one of those wok thingies ….. leave it  alone, aye??  Believe me it’s not worth it.
​This is the rug he threw up on- 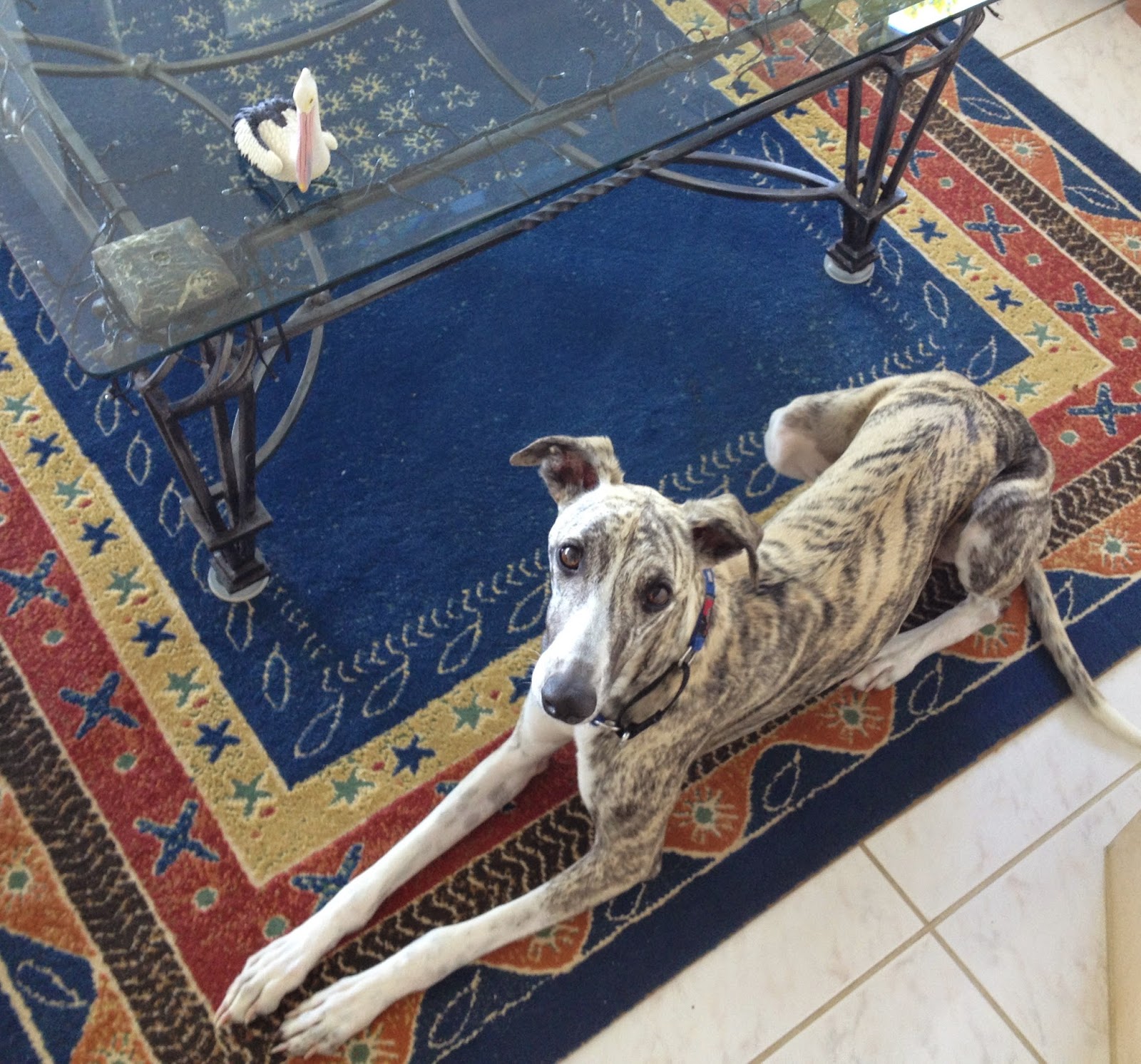 Posted by The Ladies of Beaglebratz Manor at 4:30 AM

oh boy, Charlie that was a wicked wok, wow! and you are a her, imagine what would happen to the dishwasher if that poor thingy had to lick clean that wok and what the carpet had to bear when the dishwasher threw up there :o)

OMD...Poor Pup! Tummy aches are the worst! Bet his Dad learned a lesson about woks and pups!

Hope you're feeling better today! We agree about the carpets. They are just like grass, so why shouldn't we scooch our butts on them? That's why we have hardly any of them any more.

Oh Charlie, you poor beautiful boy, so sorry you got so sick and were all alone when it happened. you just had no idea what it could do and i am glad it did not kill you which it could have. i think daddy might have to take the blame on this for not seeing you eat the wok stuff...or the man who left it there. not your fault sweetie.

Poor Charlie. Hope he felt immedietly better. Don't envy the cleanup! Did you know you're featured today, Shasta, that is, on the Pet Parade? Come on over ~Rascal and Rocco

Now that's a whoopsee...or is it oopsie? Big time!

Wanted to stop and say Happy October Bdays to the Beaglebratz...namely Shasta and her person.

Y'all come by now,
Hawk aka BrownDog

Oh no Charlie you and your poor tummy. We hope you are better now. Have a fabulous Friday.
Best wishes Molly

OMD CHARLIE... CRIKEY you really did get sick. Sorry buddy.

Charlie, you are innocent! You are a victim! Nothing is your fault!

Crikey Lord Shilo and Diva Shasta. I'd forgotten about that little mishap. Thankyou for featuring me on your page. I didn't quite understand the guest post thing when I did that. I know more about blogville now and I will do better next time. It was really nice of you to share with me. You two are the best. I'm so glad we are friends!!