The mom here but I did get some help from the Beaglebratz for this review-they (Shiloh the bully) helped with the "modeling".

About 2 weeks ago I first got an email from Kim Chambers at VetDepot asking me if I would be interested in doing a review for their website and in exchange I could choose one of their products to use.  Ok - as you all know, I'm WE are not new at doing these reviews in exchange for testing products and in a way, I'm sort of honored when Team Beaglebratz is chosen for this - so why am I still a skeptic?  Well luckily for the Beaglebratz, that skepticism did not last - WE read another review over at Feisty Three
so I talked it over with the Beaglebratz and of course they said go for it - so we did.  Then when I saw that one of the products I could choose was Cosequin I just had to try it for the Beaglebratz.  I had been watching them race around the livingroom, chasing each other and

knowing that Shiloh has already had problems with Intervertebral Disk Disease and then Shasta being his actual niece, I wanted to do what I could to make sure they are able to keep that behavior as long as possible.

So, on April 19th, I emailed Kim at VetDepot my selection - she emailed me on April 20th to let me know that the Cosequin I chose had been shipped and I kid you not, on April 23rd, when I opened my mailbox- 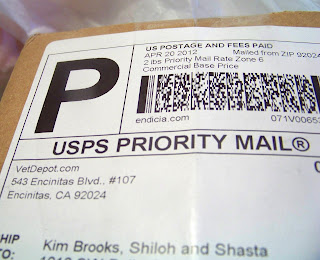 Talk about being surprised.  And you know that 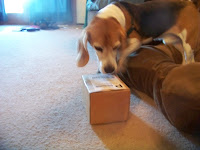 Shiloh had to check it out
But as usual, he was not
impressed by 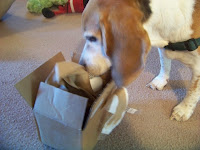 what he thought was
just paper - but mom knew different.  Shiloh thought there was nothing good to eat. After I gave him one, he decided different.  The tablets are easily chewed and he snarfed it down lickity-split.  The Queen Diva Shasta had to have hers with some peanut butter but she too, thought it was a good treat.  I thought I had a picture of Shasta but evidently not - she tries to avoid things like this when Shiloh the bully is near.

Ok, I was impressed with how quickly I received my order but when I WE checked out their website, WE were also impressed with all of the different types of pets they have supplies for. Of course they carry your usual doggy and kitty vitamins and other supplements, both prescription and non prescription meds and flea and tick treatments plus other supplies too numerous to mention.  However, they do not stop there but also stock things for small pets such as hamsters, gerbils and others - yes, even lizards then there are the fish supplies and livestock too.  Not just the medications and feed but things like hamster or gerbil habitats and aquariums for your fish or lizards.  If I gave an example of EVERYTHING they have, I would be here for HOURS or more (and the Beaglebratz would think I had abandoned them).  So I think the BEST thing for you to do - go check out ->

VetDepot.com
for yourselves and see what all they do have to offer.
~Kim, Shiloh'n Shasta~


Posted by The Ladies of Beaglebratz Manor at 12:49 AM

We needs to go and check dem out! Almost time to order da heartworm meds again!

I got MY heartworm and Flea and Tick thingys from them.

You are RIGHT... very easy to deal with and my stuffs came very very quickly!! I was totally STUNNED at how much we SAVED on Both.

Guess MOM will have to go check this out. Thanks for the info
Blessings,
Goose

Great review. We will have to check them out.

I am sooooo glads ya'll gots some stuffs furs da joints. Dat is really gonna helps Shilo.
I gots an email from them and so I needs to goes read it.

Don't worries at all, I not furgets da ground hog furs da grill. I hopes ya'll is readies to pawty.

I'll have to check them out! Thanks for the info.

I'll have to check them out! Thanks for the info.