A Sunday Update on Shiloh, Lord of the Beaglebratz Manor 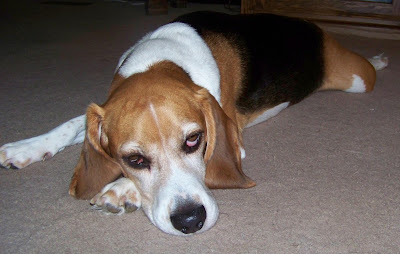 In case anyone missed
our last update,
I WAS able to bring Shiloh home this past Friday around 5pm-
between recovering from the anesthesia, the antibiotic and pain med, I don't think I have ever seen a dog so unsteady on his feet.

After slseeping most of Friday evening, Shiloh showed an interest in eating so I gave him a couple of bites of soft dog food which he was quite willing to snarf down.  He also drank water very well, took his meds hidden in a little cheese and
went outside willingly.

Saturday was more of the same but more alert and much steadier on his feet.  I am not sure what is going on with Shasta - rite now she wants little if any thing to do with him-
not even laying on the big dog bed which is big enuf for both.

Since the vet was out on a farm call when I picked up Shiloh, I did not have a chance to talk with him excdpt when he called me to let me know when I could pick him up - I had a couple of questions but I was just listening to him give me directions for Shiloh's care so I ended up calling him bak Saturday morning.  I went ahead and had that lipoma on Shiloh's side removed - it was so large I was worred that he mite hurt himself or bang it against something -
it was just a fatty tumor;
I knew Shiloh would lose some teeth BUT TEN?  O-M-D!!!
And I guess a couple of those needed to be cut out;
and FINALLY -
there was that small tumor on the roof of Shiloh's mouth.
The vet removed that and in order to be able to suture the incision closed, he had to remove a small piece of bone also which is why Shiloh is on an all soft food diet rite now with NO biscuits or
doggy cookies.
And no kibble mixed with his food.

So, that is where we are rite now-
Shiloh is healing well.
I also asked about the pathology
report on that mouth tumor-
it will take about a week to get the results but he thought it was good that the tumor was small when it was removed.
I am trying to push that thought to the bak of my mind but I know the thought of "what if" is there.
In the meantime, I am trying to slow down my thoughts and just take things one day at a time-
YEAH RITE-ME DO THAT?

Again, many, many thanx for all the prayers, purrayers and POTP-
and PLEASE continue them. 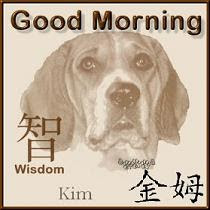 Posted by The Ladies of Beaglebratz Manor at 4:30 AM

i am so happy to start my day with this good report, we will just ignore that what if and pray for the best. so glad Shiloh is home and eating and drinking and doing the outside thing. when baby had surgery, Jake would not sleep with her either. i think it is the smell of the anesthesia... i have what i call a dog nose, i smell things others don't smell and Baby stank of that anesthesia to me. strong smells effect the pups even more. hugs and kisses to all 3 of you

its great to hear that all things heal up without problems. I coss my paws that the results are good too when you hear from your vet next week. POTP to you all and hugs&kisses

Keeping all our feets crossed for you Shiloh
Snorts
Lily & Edward

We are continuing our POTP for Shiloh!!!
Smileys!
Dory, Jakey, Arty & Bilbo

Sending good vibes to Shiloh - ten teeth, oh, my - my sympathies. I hope everything else turns out good. One day ate a time, that's all anyone can do. Love to the little guy!

wish you a speedy recovery Shiloh,rest up my friend,xx Speedy

Will continue to pray for Shiloh! That's great that he's home and wants to eat and drink!!! Those are always so key to a good recovery!
Shasta might just understand that Shiloh needs some space. He also probably has the "vet smell" on him, so that could have something to do with Shasta not wanting to hang out with him.
Hang in there!!!
KZK

Glad to hear Shiloh is recovering, if slowly. Keep us posted!

Poor Shiloh, he got a real working over of the mouth! Hope that the report comes back OK and he can go one being a happy boy!

Oh Shiloh, I am sendin' you lots of healin' vibes and POTP and your MOms and Shasta tons of AireZens!!! You gets better real fast, and I have a good feelin' that those results are gonna be good ones!
Kisses,
Ruby ♥

We're so glad to hear Shiloh is doing better. We are keeping our paws crossed for good news on the pathology report.