Halloween through the years on #ThrowbackThursday plus re-visiting old goals

Mom Kim here for today - been doing a bit of reminiscing at old Halloween pictures.  This first one is of me and my two
fur-angels - Shiloh and Oreo.  We were waiting for the
costume parade at Petsmart. 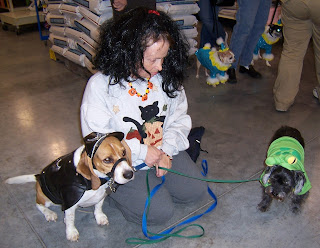 This is my favorite backdrop to use - this was the Halloween just before Lady Shasta joined our furmily - in fact she was about three weeks old and would join us in about 5 weeks - we just didn't have any idea at the time that our paths would soon come together. 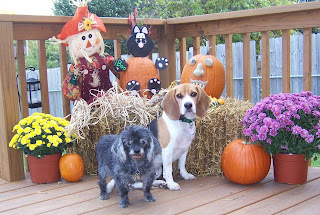 My fur-angel Shiloh with an attitude 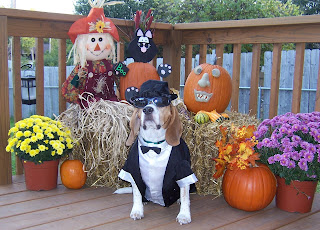 This was the first Halloween picture I could find of
Team Beaglebratz. 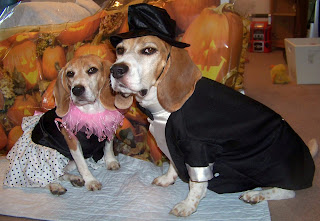 Angel Shiloh was the Biker Dude and Lady Shasta was
a fancy butterfly. 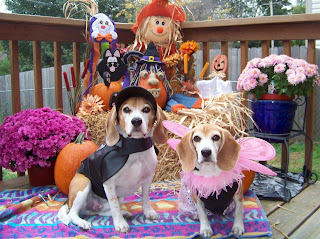 The Team looking for skeletons in the closet 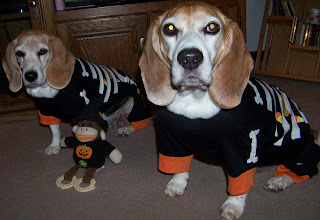 Evidently the Team found some skeletons out here? 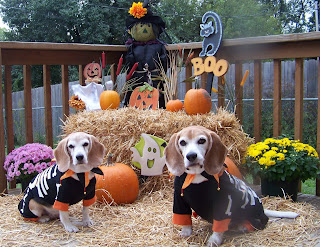 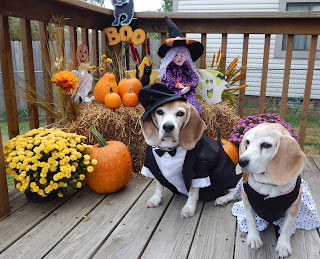 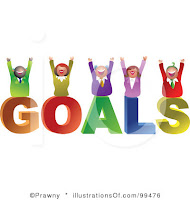 These past few months have been kind of some off few months for me when it comes to the blog and not sure how things will go in the near future.  Wanting to sell this house is still on the burner and slowly getting the work done I need in order to do that HOWEVER instead of trying to sell it this year -
it's pretty doubtful that will happen as I have just not
been able to get the work done as quickly as I had hoped.
So unless a miracle suddenly blows in and ALL the work can be done in the next week or so,
I am pretty much resigned to the fact that
putting the house on the market
won't happen until early spring of 2017-
especially as the holidays draw closer.
Also my sis and I will be visiting family in Louisiana sometime before the end of this year so that needs to be figured in to when work can be done also.
Actually not selling until spring may work out for the best as
it will allow me more time to find things like
little areas that need paint touch-ups and
other such odd jobs which just might improve the chances of selling this house.

Another goal - that all too elusive 1000 posts.
It would have been great if that had happened BEFORE
Angel Shiloh journeyed to the Rainbow Bridge but
with all my medical problems and then his,
and how life in general just seems to have other plans at times,
I guess it was just not gonna happen that way SOOOO...
it is still out there to reach 1000 posts by the end of 2016.
I was on track until this past few days to be able to do
that with just 1 post per day HOWEVER-
once again LIFE took over-
not problems with my vision but
just life in general-
including
Lady Shasta having her own problems with her
Intervertebral Disk Disease or maybe
just plain old Arthur-itis and getting older.
It's better plus I have found out she likes
wearing a light-weight sweater,
especially in the morning when it's cooler.
ANYWAY-
we will both be trying to
post more and there is
a good chance that on some days you will see
more than 1 blog post so just maybe we can make
1000 posts by the end of the year. 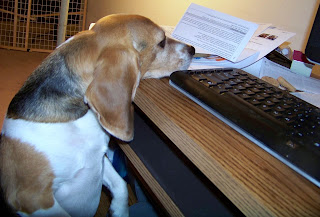 Of course if it was totally up to
Lady Shasta we would have been there already.

Ok - I have been rambling long enough-
if I am going to at least get 1 post today then
I need to shut up and post.
(have you ever noticed that rambling seems to be a human "quality"?)

Posted by The Ladies of Beaglebratz Manor at 12:01 PM

What a wonderful photo collection! Good luck on hitting the 1K posts. We think you can do it cuz lots of Blogville events come up during the Howlidays. Now, since selling the house has been pushed back how does that affect the timeline for a new pup?

That was so fun reminiscing like that! My mommy loves it when we look at old Halloween photos. I was such a cute puppy.
No worries about not reaching all of those goals. There are a lot of them and they are big ones. The important thing is to TRY. If you make it - great! If you don't - just keep on trying.
Love Noodles

Halloween (or as this sausage dog calls it, Howloweenie) is a really pawsome day!

We loved seeing all the old Halloween pictures. From now until the end of the year isn't a good time to sell a house. You, hopefully, will have a quicker sell come spring.

that was great to walk the howl-o-ween memory lane with you... we cross our paws that you will reach all your goals, we look forward to 100 posts and we hope that efurrything works like eggs-pected on the house front...

hello mom kim its dennis the vizsla dog hay wot a grayt buntch of halloween pikchers and memreez!!! my dada luvs halloween and not just becuz it wuz tuckers birthday eether and he sez yoo hav reely got the halloween speerit!!! ok bye