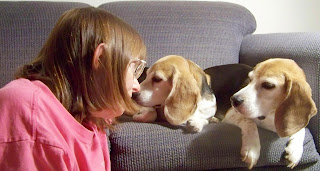 I better get this done or it will end up being Mom's Musings on Tuesday which really doesn't sound as good.

You have probably noticed that I have not posted lately - there has been a couple posts from the Beaglebratz or about Shiloh but not much about my eye/vision problems - and that is a good thing rite?  Well they are still there - kinda - but the more acute and immediate phase has passed.  That is NOT to say EVERYTHING about mu eye/vision is better - nothing could be further from the truth. Yes, there has been SOME improvement but will there be anymore - entirely unknown.  The major thing to me (and my sis who provides ALL transportation) the doctor appts. have slowed ddown to every other week instead of every week and there for a bit it was 2 and 3 appts. each week - mostly in Kansas City.   One of the last appt. I had in K.C. was with my ocular plastic surgeon - the doc who fixed my droopy eyelid back in January of this year.  As he was checking my eye he said "the graft is SPECTACULAR!" {graft meaning the most recent cornea transplant I had on 6/23/15}.  Now I realize that he was referring specifically to the graft but I still ran with it - I had never heard that word from an eye doctor when looking at my eye.  THEN when I asked "well than would that apply to my overall eye condition since you first saw me"?  He nodded yes then further said "on a scale of 1-10 with 10 being the best - it is a 10!".  Well ok then - NOBODY had said that about my eye for ???????????? (probably almost 40 years when my initial eye problems began)  On the way back to Topeka, one of our usual stops is the Legends - a super nice outdoor shopping area and MANY eating places, a Cabellas, nearby Kansas Speedway, The Great Wolf Lodge and who knows what else.  Our fav since we're traveling is Chik-fil-A then Russell Stovers for dessert but before we go to either we stop at Auntie Ann's - soft pretzels.    Then about a week later, when I saw my local eye doc he said there was NO sign of a defect, NO herpes eye infection or fungal infection - NO new problems - this has not happened since the cornea transplant.  My next appt. is a week away, with my cornea specialist.  Now I am all caught up on that.

The next thing, as you may remember, I got the letter from the Office of Personnel Management (the VA is included in that, my employer for almost 29 years) did grant my disability retirement.  A few days later, I went in to turn in my badge and keys and say good-bye.   A few weeks earlier I had gotten the same determination from Social Security.  Working at that job is now a thing of the past - now all that remains is emptying out the 2 boxes of personal items I brought home.  The Beaglebratz have named me their unofficial revolving door allowing them access to the outside whenever they want.

Next - this past Black Friday, when all the pre-Christmas sales were happening, I picked up a new camera, a Nikon Coolpix L830 - in a real pretty plum color which I had been wanting for some time - Best Buy finally had it at a price that was hard to turn down.  The problem - I had this nice new camera and my vision started going downhill soon after I got it.  Luckily I was still able to take pics altho I had no idea of the quality.  So I have all these pics from the past few months that no one has seen - this is about to change.  Something else that is about to change - I am going to take a back-seat on the blog and give control back to the Beaglebratz.  After all, it is THEIR blog.  I will still pop in like next appt. or some other real good reason but otherwise, it is all theirs. Not sure yet how often that will be but at least it is a start. 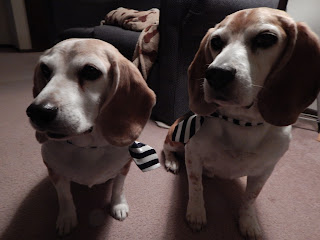 Lady Shasta        Lord Shiloh
Posted by The Ladies of Beaglebratz Manor at 3:59 PM

Good to hear that the constant running for appointments has slowed considerably.
It is exciting about your eye health - always good to hear, I just wish the sight was better for you.
Know what you mean about being a doorman for the pups - I feel like that all the time.
More pictures of the BBratz - super!

Sounds like good news. Mom got that same camera for Christmas, it takes nice photos. It will be nice to see the beaglebratz more often!
hugs
Mr Bailey, Hazel & mabel

We are glad to hear things are going well for you. Is Shiloh OK now too?

We're glad to hear such good news from your doctor. That picture of the Beaglebratz looks great so we think your new camera is working well.

Glad to hear your eyes are getting better. Have fun taking pictures with that new camera.

So glad to read that your eyes are doing so much better!

It's good to hear some really good news and I wish you all the best, from the bottom of my silvermistygrey heart. My paws are always crossed for Diva Shasta; Lord Shilo and their momma :o) I like the cam you picked, it works really great... maybe we will get such a black friday treasure this year too :O)

This is such good news! Very happy for you. May your life be filled with lots of positives now.