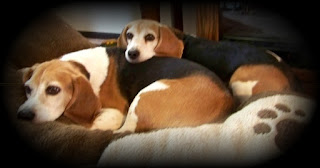 Lady Shasta is being the good nurse this picture shows.,  She does not like it when her big brother, Lord Shiloh is not feeling well.  And I hope we are over the roller coaster ride we have been on.  He told you about the new vet we went too - found out he had developed a skin infection and that his ringworm was not the problem now.  Also at that vet visit we found out he had a couple of swollen lymph nodes that were a little painful too.  Also get a new antibiotic which in turn ended up doing a number (and not a good number either) on his appetite.  Ok - in all fairness don't know for sure if the antibiotic was responsible for this, it is a rare side effect after all and the vet was wondering if there was something else going on - he wanted to do a biopsy of those swollen lymph nodes and they would have to do that under anesthesia.  That really worried me because of Lord Shiloh's overall poor condition and his age ( next month).

So while I was thinking about all this, our other vet called with the test results of the skin culture from Kansas State Vet School - no wonder Lord Shiloh was having problems fighting this skin infection - he had not one, not two but THREE strains of bacterial infection going on.  He also had a new med based on these results.

Ok, time to regroup and rethink this process.  I called back the new vet clinic - explained to them this whole thing and what I had just learned.  And that I had decided, given Shiloh's current state of health and age, hold off on the biopsy which would mean putting him under anesthesia.  Now Lord Shiloh is only on the med recommended by K-State based on the results of that test.

He also appears to be at least a little more interested in food - just not any dog food that he was eating.  He has eaten bites of cheeseburger, boiled chicken, soft dog treats.  I had boiled some veggies yesterday so they would be easy to make into a mash - still didn't want them until I drizzled a little honey on them then I saw the Beagle gusto in eating.  Today he is eating raw cauliflower.  He is eating pieces of a hamburger bun - a while ago I was sitting on the floor and he was lying on the sofa - he saw what I had and jumped down to come over and get it.  I am a bit more optimistic - there is still the issue of swollen lymph nodes but I also know that could be due to the infection - just have to wait and see.

reading some of the bacteria that it is used to treat showed me just how bad Lord Shiloh's infection is especially with 3 different kinds.

By the way, if anyone has ideas what I could feed him besides kibble since he won't touch it,  I would appreciate it if you could let me know. 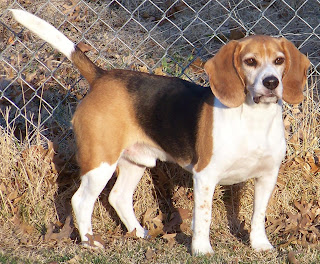 Posted by The Ladies of Beaglebratz Manor at 4:38 PM

Lifting up the POTP for your Shiloh. Glad the vet school found out some new info.
Wags,
Noreen and Hunter

My goodness, three types of bacterial infections? No wonder he is not doing so well. Sorry to hear he's off his feed. I have no idea what you should feed him - I would do it wrong and cook him people food (without salt or spices) and ruin his eating habits, just to see him eat. Wish I could be of some help.

Sounds like a lot of stuff is going on. We will steal a photo and get him on the potp blog.

Oh No .... poor Shilo ..... lots of POTP heading his way from downunder. so far I've never been sick but whenever any of Mum's previous dogs have been crook she stops feeding them any form of kibble and cooks up a stew of boiled chicken, a few vegies, mainly carrots and beans, and rice. No salt, no onions, no spices. She's made it for me too and I love it. Might be worth a try. Get well soon, Shilo!!

We are sending lots of POTP and warm snuggles Shiloh's way!

We are crossing our paws for Lord Shiloh. We hope you can find some dog food he will like to eat. Maybe some sort of canned food will do it but it isn't any fun to keep buying food he won't eat.

Oh poor Shiloh....Lots of prayers and POTP heading your way.

Poor Shiloh - lots of hugs and healing thoughts headed your way. When Barkley was ill and didn't want to eat the "nasty dry crap" as his dog placemat labeled it, just simple steamed chicken and rice was happily received.

Have you tried some pumpkin? Not the pumpkin pie stuff, just the plain pumpkin in a can.

i am sending potp!!!!!! and a milion magic healing bubbles! maybe some peanut butter on toast
love tweedles

Shiloh, I am crossing paws for you and sending you lots of love!!

POTP to you dear Lord of the manor...I hope all our good wishes and crossed paws will help you ...

prayers going up for you and for Lord Shiloh.. i hope the new med does the trick and that someone knows what of feed him. i know our vet gave us cans of specail food that i had to nuke in the microwave when Jake was so sick. maybe the vet has something?

So sad to hear this. POTP.

If you are willing to cook for him, then I would go with what CharlieDownunder recommends but...I would add some canned (and rinsed) red beets which are great for minimizing inflammation (believe it or not). Oz gets canned (and rinsed) red beets every day; I do not even cook them, just add them into a mix with turnip greens and sweet potatoes to serve along with his food. There's a lot of antioxidants in that mix that are super healthy for dogs. Along with some chicken and rice, maybe that will help bring back his appetite

We are so sorry for Shiloah going through this. We know his health is stressful for you, too. Praying for him.

We are sending lots of love and POTP your way. I feed the boys Dr. Harvey's Canine Health and they LOVE it. You add your own protein and oil so perhaps Shiloh would eat that. If you decide to order some, I have a discount code on my blog. ♥ ♥

24 paws crossed for Lord Shiloh. So sorry to hear all this bad news. We understand about not doing the biopsy and sending out prayers and POTP.

Whenever we are having a food issue, boiled chicken and rice always does the trick.

when our mom got really really sick one time they put her on the same med and she got better, it took her awhile but she did. sending you al our hugs and prayers...stella rose

Offering up prayers for Shiloh!
Like the others - boiled plain chicken and rice. You could also try the canned version of his food.
I have great faith in the vets and labs at KSU; we use them as our "regular" vets.
KZK

We hope things start improving for Shiloh. You all deserve a break. POTP coming your way!

We are starting the POTP right away! I do the science diet canned when the girls go off their food or I cook up hamburger and rinse the fat off and combine it with rice. I will add in green beans for Mazie because she likes them and it gives her more fiber. Chicken broth and rice works when they really don't feel like eating, I get the 98% fat free and warm it up slightly in the microwave so it is tepid and smells more "interesting". I will put Shiloh in my prayers too.
Marty's Mom

hello beagles its dennis the vizsla dog hay me and my sister saya ar sending lots of tail wags to yoo owr old frends!!! feel better soon shiloh!!! my brother tucker wuz on doxycycline wunse and it helpd him owt i hope it duz the saym for yoo!!! ok bye

Shiloh way back a long time ago my peeps had a mini Dachshund. Anytime his tummy felt poorly mom would buy lean hamburger. She would put it on paper towels to be sure all the grease was gone then mix in a cup of cooked rice.

It did the trick every time.
Hugs madi your bfff