Mom Kim here - linking to the
#RememberMeThursdar Blog Hop and
wanted to thank
Lola the Rescued Kitty
&
Three Chatty Cats
for hosting this blog hop that is
bringing awareness to Pet Adoption. 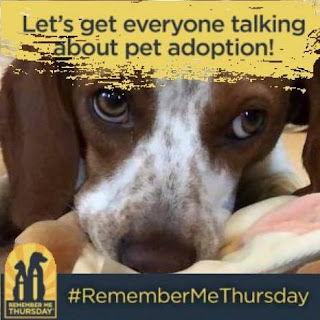 For those who have not heard this story before-

When Miss Maizie Became a Kansas Pup
In late April of 2017 a Facebook friend-
some of you may know "Flea"-
first contacted me about a Beagle in need of a new home, asking
me if I knew of someone in the Tulsa area who would be looking for a young, female Beagle?
I had been looking for a female Beagle puppy and in fact, at that time I had a tentative adoption contract on one in another state.
HOWEVER - there was already a contract on that pup waiting to be approved and as luck would have it,
that first contract WAS approved.  So there was some more discussion then when I saw this picture- 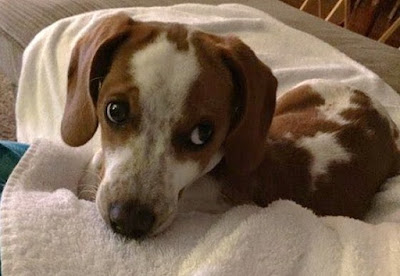 I knew I had made the right choice.
By the age of 8 months, Lucy whom I renamed
Miss Maizie - a pup getting a new start in a new home deserves a new name - knew how to use those beautiful eyes of hers.
Ok, so I didn't go to a shelter to adopt Miss Maizie but I have very few doubts that she would have ended up there or worse.
And I have no doubts at all that I did rescue her.
Even though her first family took good care of her, because of  their family situation, they eventually became desperate to rehome her.  Lucy/Miss Maizie knew some basic commands and was even potty trained very well but she had that unruly Beagle puppy side that I knew what to do with - that side of her is what could have landed her in a shelter.  After Flea agreed to bring the pup to meet me and my sis in southern Kansas -
Miss Maizie moved here to Topeka with me'n Lady Shasta.

Now for those who may be new since then, here are the
first two posts from when Miss Maizie first moved in.
PART 1

I also want to thank
Athena Cat Goddess
for first reminding me of this most impawtent event.

Posted by The Ladies of Beaglebratz Manor at 11:40 PM

Miss Maizee is in the purrfect home now! Thank you so much for rescuing her and sharing her story. And thanks for hopping with us. We appreciate your support.

I remember when Flea found your sweet Miss Maizie! I'm so glad to all of you.

Miss Maizie, we are so happy to read about how you were rescued and now live in your furever home. That picture too would have made us want to rescue you also. Such sweet eyes you have. We hope the word for today is spreading around for Remember Me Thursday. Thanks for the share. Have a wonderful day.
World of Animals

Feline Opines, the World from a Feline Point of View said...

What a great story! My sister Jasmine and I were rescued in California and we then moved to Idaho. The other three tribe members are Idaho rescues.
Purrs & Head Bonks,
Tucker & The Tribe of Five at Feline Opines

Awww you and Miss Maizie were meant to be! Thank you so much for participating in the blog hop and spreading the word about Remember Me Thursday. ~Christina

Thank you for sharing Miss Maizie's rescue story! Not all of my pets came from the shelter or a rescue either -- but they're all rescue pets! Thanks for joining our blog hop.

I remembers your story Miss Maizie!! Butts, I don't remember seein' that adorable baby pic of you! What a cutie patoooootie! I am so glads you picked your Moms and Diva Shasta to live with furevers, cause you joined us in Blogville, and we all gets to watch all your shenanigans! BOL!
Gives your Moms a slobbery kiss from me for adopting you! (make it extra slobbery, k? I gots lots of slobbers...heheee)
Kisses,
Ruby ♥

Miss Maizie sure is lucky to have found you and Lady Shasta. She landed in the perfect home for her.

I absolutely love Miss Maizie's story. She is such a beautiful dog and her eyes have me melting.Such a lucky girl to have been found and given a wonderful home.

We had a Beagle named Archie. He had terrible health issue from the start but he was always a happy energetic puppy and full of mischief, as you've experienced I'm sure being a Beagle mommy yourself. He would have never survived puppyhood if we didn't take him and even though he only lived 6 years, it was way more than we expected. I started this blog because of him. I just had to document his goofyness. He taught us so much on how to live life even through adversity.

Miss Maizie is a lucky pup having you for her family! And those eyes..who could say ever say no to that sweet face! xo