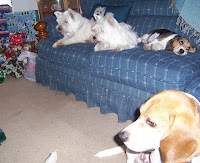 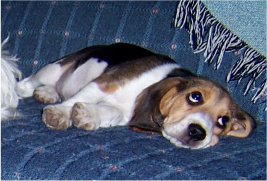 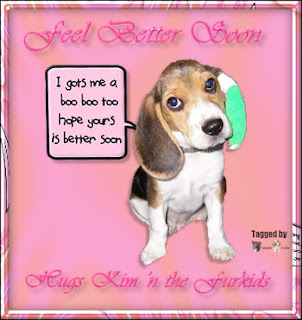 Posted by The Ladies of Beaglebratz Manor at 12:19 AM

Uh, dat foto is a classic of da doggie eyes and it is just perfect....hehehehe...uh, and it made me laugh! Poor Shasta, no time is a good time to go to da vet but, on Christmas Eve...wells, dat just ain't right!

I am a master at the poor me look! Bawhahaha!!

Peeps are such SUCKERS fur.. the LOOK, aren't they??? Just one more thingy fur us to be Thankful Fur. hehehe
Happy Thanksgiving to you and your peeps.

What a sweet pic - you are right, we do know how to use our eyes. Mom says beagles do it quite well.

Happy Thanksgiving from all of us.

Woos ~ Phantom, Thunder, and Ciara, and the Momster too

Oh, poor puppy!! Jack had to go to the vet when he first got here too!!