According to 123holiday.net All Souls Day is the day celebrating all friends and loved ones who have passed on.  It is typically observed largely by the Catholic church altho really it is a Christian day of observance and usually celebrated on November 2nd.  In observance of this special day, the Anipal Photo Hunt blog hop is dedicated this year here in blogville pet community to our beloved pets and trusty companions who have crossed over the Rainbow Bridge.

I have had more than the ones shown here but these are the ones I have either scanned their pictures or I had my digital camera.

Did you ever have a dog or any pet when
you were in high school (for me - years ago)
that you wish you had now? 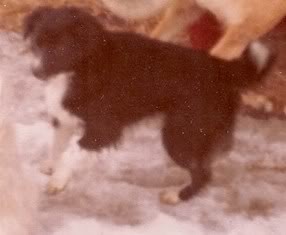 (excuse the poor quality - scanned photo)
Kammie is that one for me.
I got her from the pound and she was believed to be a Sheltie mix.
I got her for my high school graduation and
as a bribe to stay and not go to the college I wanted
for the reason I wanted - a move to a small farm and increase
in my involvement with horses was also part of the deal.
But Kammie was always active - even in her late years when despite
being almost blind and deaf, she would roam the country side.
She was the one who would always come running and jump into my arms
when I called.  If agility had been as popular then as it is now,
I'm sure she would have been a strong contender.
But when I think of her, I think about the Christmas Eve in 1976 when I
came home from a 6 week hospital stay following a near-fatal surgery-
my head was totally shaved and I didn't look much like the "mom"
she (Kammie) remembered; when I walked in the door, Kammie growled and would not come near me.  But as soon as I sat down and she heard my voice, that was all it took and she came over to me-
we were inseparable the rest of the evening-
she would not let me out of her sight.
This next little girl was Kryket. 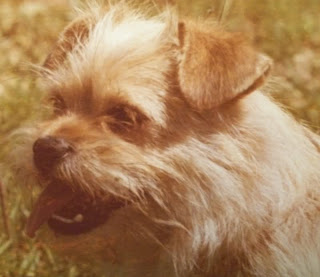 Kammie was at the farm when Kryket came into my life as a little puppy-
I can't remember what the store said she was
(this was long before I knew about puppy mills)
but when I think about her I wonder about
a Border Terrier/Pomeranian mix
(how's that for a mix)
But she had the hair coat and her nose/head looks kind of like Border while she had the short legs/body and tail of the Pom.
Kryket came into my life following the still-birth of my first colt.
I don't remember a whole lot about Kryket except
she was always around -we never had to shut her in the house-
could usually be found around the house or up at the barn.
In 1990, I was living in a small apartment in town
(Kammie was still alive and living with my folks in a 3-acre suburban home)
June of that year my mom died then later that summer, when Kammie was found roaming the country roads (this is when she was almost blind/deaf),
the decision was made that instead of risk her getting hit by a passing motorist, (I could not have a dog in the apartment)
it was time for Kammie to cross over to the Rainbow Bridge.
(Believe me, the decision was not totally mine and if I knew about dogs then like I do now, that might have not happened - at least not that year) since Kammie was not really slowing down much in other ways and
my mom had just died a couple months before).
It would not be until early in 1991 when a

little black puppy with a small white spot on his chest entered my life - this was Oreo, 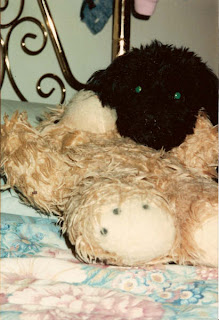 
For the past few years, even before Oreo crossed the Bridge
I always wondered if his breeding was something else
like Schnauzer and Poodle - he had absolutely no qualities of a Yorki.
Especially when a little older and when groomed,
his hair quality was more Poodle and
wirey like a Schnauzer than anything else.
Living in a small apartment, Oreo was the perfect size for the great companion he became.  In the fall of 2001 - Oreo was 11, when we moved into our house.  A couple of weeks after we moved, I was able to get the backyard fenced - one of my memories of Oreo is when he first experienced being loose in a yard that was good size - he had always had to be on a leash and did not know how to react to being loose with mom not real close by.  At first he would follow me to the backdoor but he soon realized that he was free to sniff and roam til his heart content - I was thrilled to be able to give him some freedom.
I had never had two dogs at one time in the house and Oreo remained my only until May of 2003 when
Shiloh joined the family - they became best buds and despite the age difference and eventual difference in size, 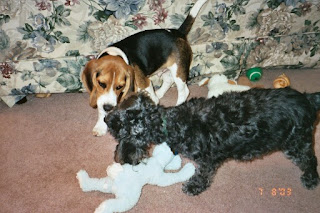 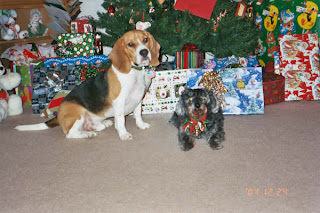 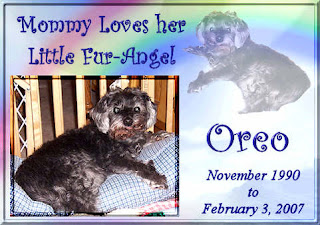 This time, that decision was the most difficult-
it was totally mine.
Before, whenever one of my dogs made that last trip to the vet,
it was more of a family decision and I wimped out going.
With Oreo, that changed and I will never "wimp" out-
my dogs have given me the best years of their lives-
they have so earned my gratitude and respect and
it is an honor for me to accompany them as they begin their final journey.
I owe them that much.
~Mom Beaglebratz~
Posted by The Ladies of Beaglebratz Manor at 1:04 AM

Kess And Her Mama said...

What a great tribute to the dogs in your life!

What a lovely tribute!

How wonderful to share your memories with us. Thank You!!

Thank you for sharing those memories with us.

What a beautiful post to the dogs in your life! Mom says she could probably write forever about all the pups in her life, each and every one special in his or her own way. We really enjoyed your memories of your sweeties.

Wot grate memories and it looks like those dogs teached lots of lessons. I always say our hoomans are the wonnerful dog moms and dads we know today becoz of wot those afore us teached them.

I am exploring your blog... falling in love with all the animals you've mentioned. Thank you for stopping by my blog yesterday! I'm a follower now!

We really enjoyed your posting in honor of all the great loved ones. This is such a beautiful posting. Thanks for sharing!!

pees we are now your newest fans

Loved your postings, it made me remember about the dogs I grew up with and all the fun times. Wow, Kryket and Kirby could be relatives! Thanks for sharing.

I love this post. Each pup brought some special memories to your life. IT is a wonderful tribute.
norwood

What wonderful anipals and they certainly deserve the wonderful tribute you have given them.

So many wonderful memories!

Lovely memories, beautifurr dogs - thank you for sharing their sweet stories with us. xoxox ~Andy