We Beaglebratz r not here tue-day - 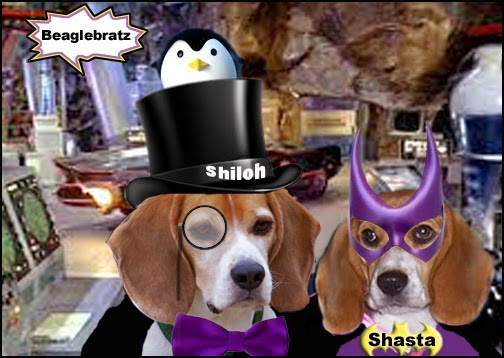 Most of you, maybe ALL of you, did not see
the first blog post ever done here,
that was back in 2008 - BEFORE
I turned the blog over to the Beaglebratz in October, 2009.
I wrote a total of FOUR blog posts that year-
I began in February and ended the year with 4 posts-
NOT due to my vision problems either.  And I didn't
get ANY comments on those first 4 posts.
Anyway, that first post really wasn't that great,
I had no idea what I was doing.
Here it is and you can make up your own mind-
>>>>>>
>>>>

I'm sorry if I burst anyone's bubble but ANY DOG will bite if there is reason - and that is not your reason or mine but the DOG's reasoning. Have you ever been bitten by a Cocker Spaniel? I have. Have you ever been bitten by a West Highland White Terrier? Again, I have. Have you ever been bitten by a small mixed-breed dog(Yorki-Poo)? And one more time, I have. I have seen with my own eyes a Pekingese attack a woman's husband simply because he wanted to sit beside his own wife on the sofa. I have seen Labrador Retrievers chase their owner simply because the owner wanted to take them for a walk.  Whether a dog is bull-headed, onery, or even becomes vicious - in almost all cases, it is due to being provoked or environmental such as how they were raised - it is extremely rare for a dog to be born that way.

As anyone who owns a Beagle will tell you - a Beagle is NOT for everyone. I happen to own 2 Beagles and it is HIGHLY unlikely I will ever own any other breed, ever! And, just because someone only READS they aren't trainable - that does NOT make it true. Until you actually own at least one of these magnificent animals - DON'T pass judgement on them. One of my Beagles (which, by the way, are purebreds and registered with the American Kennel Club) visits in nursing homes and at a hospice and goes to the library where children take turns reading to him - you try being a small dog and have to tolerate a small child poking fingers in your ears and climbing on you. This dog has also earned his Canine Good Citizen award from the AKC - a series of tasks that a dog must perform to test behavior/temperament. My other Beagle has successfully completed her basic level of obedience training - will soon enter her intermediate level and continue training for her therapy dog standing. I talk with many who own Beagles and would not own any other breed. Beagles are listed as #5 as the most popular breed in the AKC.
-----------------------
See, I told you it was not that great - I tried to warn you.
I know my biggest mistake-
I didn't back up any of my statements about
the temperament of a dog with expert references-
something I learned in college.
And not sure where I was going when I started
talking about the Beaglebratz or
why I even included that part in this post.  Instead,
using those references, I should have stayed with the subject of
the temperament of dogs and expanded the discussion.
Oh well, live and learn-
when I started the blog,
I really had no idea where I was going with it.
~Mom Kim~

Posted by The Ladies of Beaglebratz Manor at 7:43 AM

LOL we loved your bat post. I think none os us started out well as we have all learnt from the past and that is as it should be. Have a fabulous Friday.
Best wishes Molly

Isn't Ranger's BAT CAVE PAWty a BLAST... We did not EVEN recognize you tu. We are Rockin the Ol' Bat cave fur SURE.

About the beginnings of your blogging... BaaaaaWaaaah we all started out struggling to find our paths .. Butt you got your paws Well Planted NOT and THAT is what matters.

As they say, if you don't know where you're going, any road will get you there. Glad it came together!! BUTT we are wondering why all those doggies were biting you??

Oh, you guys look FABulous!!
shhhhh, don't tell Ranger I crashed his pawty...I'm gonna sneak into the front to listen to the BDA...
Oh, I also was wonderin' why all those doggies were bitin' you! BOL
I gots bit once by a Collie when I was a kid, butts not since.
I hopes you weren't hurt!
Okays, see you at the pawty...
Kisses,
Ruby ♥

We have learned a lot in our nearly 4 years blogging. There are things I would change if I could, but I wouldn't have learned from them.

Have a great day!

Crikey Mom Kim ..... your post looked ok to me. I never know where I'm going when I start my rambles. I just have fun doing it. You must be VERY tasty, aye? My Mom's been bitten by lots of dogs too and I know she tastes nice but I only lick her.

That was a very good letter.

I don't think most of us got any comments on our first few blogs, unless, like it was in my case, it was from family and friends! When I look back at some of my early posts, I cringe! Some were OK, some were pretty bad writing!
Jan, Wag 'n Woof Pets