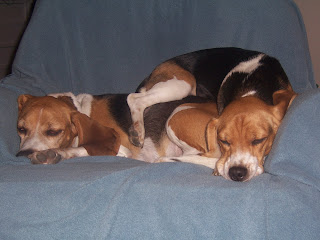 Then THEY came in and took their nap.

As for me, I am gonna start getting ready for work.

I need some time off - the weekend was way too short.

If I have a chance later today, will stop by and write a few words.

Well, my neighbor’s dog, Dara a German Shepherd, that got hit by a car this past Friday, didn’t make it and she didn’t deserve having to die the way she did. The last time (yesterday) I saw her I could tell she wasn’t well. I went and talked to my neighbor and he told me what had happened and what is worse, the dog had been suffering all weekend before she was finally put to sleep – and it sounds like it was the vet’s fault . When Dara first got hit, my neighbor called the vet clinic and told them what happened. I guess there were no obvious injuries so they told him to just watch her over the weekend and if any problems, bring her in. I guess she seemed perkier on Saturday and so my neighbor waited some more. But then yesterday, when I saw her, the poor thing was barely able to walk and my neighbor had made the decision to take her in but by that time, it was too late. I am very saddened by this and mad at the vet clinic however I am also mad at my neighbor – they have been putting off getting a fence put up – I guess Dara saw a cat and chased it across one of the busiest streets in our city. I have never seen the dog on leash but in the past, she has always stayed within the boundaries – this time she didn’t. First, I am mad at the vet clinic for not taking a more proactive approach but also I feel some of the responsibility lies with the owner. My neighbor was a little concerned about the vet initially not doing more however if that had been my dog and having the medical knowledge I do (human & animal), if I was the least bit unhappy with what the vet was doing, I would have contacted another vet. It’s called being a responsible pet owner – I know not everyone has a lot of medical background but everyone should have some decent level of common sense.  Anyway, in the past few months I have been hearing more negative then positive about this vet, including having had sanctions against him; there was also an incidence with Shiloh - he has degeneration in the lower spine (tailbone actually) and the only thing the vet could tell me was if the pain got too bad then the tail would have to be amputated - whatever happened to developing a prevention plan?  I ended up going on the web and doing my own prevention planning.  Anhway, I am looking for another vet.

Posted by The Ladies of Beaglebratz Manor at 5:46 AM