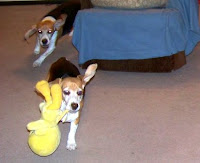 The Beaglebratz had to get their race in - after they come in from outside, almost every nite they have to race a figure eight in my living room - using the swivel rocker to make their turn.  Shasta is in the lead with Shiloh in hot pursuit. 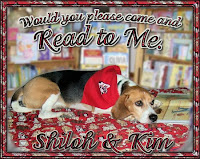 Last nite, when Shiloh and I went to our city library for our weekly READ session, I was confronted with a new situation that I wasn't sure how to handle.  A young girl, probably around 4th or 5th grade stopped by to pet Shiloh - she was quite content to just stay there by him and love on him - of course Shiloh was more than happy to accept her affection towards him.  Then I asked her if she wanted to read to him - at first she didn't answer so I thought she was just a little shy - some kids are when they find us there.  But then she looked at me while I was asking again and that is when she made a signal to me that she could not hear.  When I realized what she had told me, I felt so inadequate as to what to do next.  I motioned to her that I understood.  Luckily I remembered that I had a small pad of paper and pen with me - I showed her what I had then she happily took it.  She asked me what his name was - I wrote the answer then handed the paper to her - I could tell by her smile that she was happy.  Then she told me what hers was and I wrote down my name.  Then she made the connection that this Shiloh was the same one in the picture in the doorway of the kids department of the library - a copu of that picture I posted here.  I hope I see her again next week - I also hope to ask other READ teams what they do if ever faced with that type of situation. 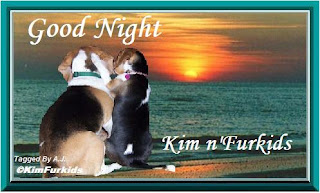 Posted by The Ladies of Beaglebratz Manor at 11:01 PM